Aartava-kshaya, which can be correlated with PCOS has been described as deficiency or loss of artava, artava dose not appears in time or is delayed, is scanty and dose not last for three days. Pain in vagina also can be seen. According to Ayurveda, Aartava-kshaya is a disorder involving Pitta and Kapha doshas, Medas, Ambu/Rasa, Shukra/Artava Dhatu and Rasa, Rakta, Artava Vaha Srotas. 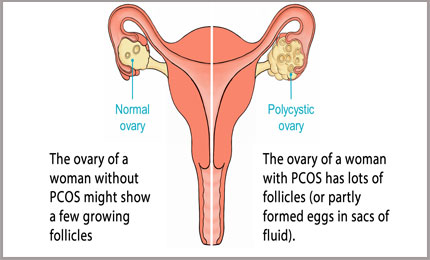 The pathology is an obstruction in the pelvic cavity (Apana Kshetra) causing disorders in the flow of Vata. This in turn leads to an accumulation of Kapha and Pitta.